It's craters and silver coloured surface are easily seen. Much Shantic mythology centers around this moon's detailed surface. 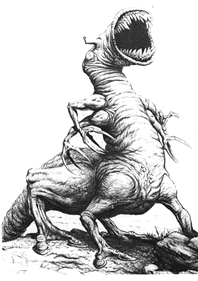 3500 Years From Now
Man's rule is ancient history, Earth only a shadowy myth.
Humans and other intelligent races survive using technologies
and tools of other times and other cultures. Their own
inspiring past eagerly awaits discovery beneath millenia of war
and regrowth

- The original Skyrealms of Jorune teaser 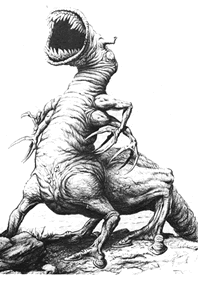 In the deep reaches of space lies a glistening blue world referred to as Jorune by most of its inhabitans. It has carried many names throughout the ages and has been a battleground for terrible wars in the past.

Now, it lies forgotten amid the sparkling cold stars - until it is rediscovered again.

The ancient terran colony that existed on the world is long gone, but the hapless humans that were abandoned there still thrive. The descendants of the human colonists have made a place for themselves amid alien races and a hostile natural envoronment. Their origins is the stuff of legends and myths, they live their lives, as generations have done before, oblivious of their once glorious past.

If you are new to Jorune, read more about human and shantic history throughout the millenia in the Humans and Shantas on Jorune essay from Skyrealms.

If you are already familiar with Jorune, please read on:

Jorune is a magical place, full of extraordinary natural wonders, colourful inhabitants and great mysteries. Just like the terran colony was forgotten/abandoned, so were the Jorune fans, when no more books on Jorune were published. Like many other sholaris, I began to build upon the great world of Jorune, adding first names and places, then beasts and items. Soon, the world of Jorune had grown immensely and I found that there was now a great number of cultures, religions and realms complete with the historic events which shaped them. Always trying to follow the original concept  laid out by Skyrealms Publishing I expanded Jorune and tried to solve her mysteries. Over the years, my version of Jorune might very well have come to differ from what other sholaris believe Jorune to be like, but I still hope that you might find some or all of my additions entertaining.

Jorune - according to sholari James

An introduction to my view of Jorune with some thoughts regarding timeline, spread of humanity, Languages, race relations, religions, earth-tech, power factions, world conspiracies, isho, tra-sense and shantic tech

An overview of the strange and nearly impossible star system wherein Jorune and it's moons is situated. Aboslutely not canon, but provides a good overview and isho phenomena overview in my campaigns. Also used during my campaigns set in Jorune's future.

27/10 2002
Introduction essay (Jorune according to sholari James) corrected. A lot of spelling errors there. - Sorry!

10/12 2002
Pheuww!! Decent work doesn't give one much time to complete more essays. Managed to get Thivin Families out though!!

22/6 2003
The Codex Jorunis (Rules Revision) added under Desti. Took me more time than I thought to get this out.

9/11 2003
Site moved to its own domain www.sholarijames.com and slightly altered

18/11 2003
Jorune PBM added to Desti. All scenes from the New Zealand run Play By Mail. In Swedish though.

4/7 2004
Whooohaa!! Finally completed my Jorune novel. Now I might have time for some more updates to this page.

7/10 2004
Lamorri essay added under Jorune and Shal. Happy reading for those that have waited. Be open-minded about my old sketches. They're from the early nineties.

20/12 2004
Pictures from my wedding put on this website. A link has been added under Links.

26/9 2005
Salu Sailors essay added under Shal and Jorune.
The last essays for a while, as my imagination will be touring Fading Suns for a while (see under Links).

9/1 2005
Guestbook removed due to extensive spamming.

6/11 2007
Sorry, still no updates or new material. Jorune is not forgotten, simply resting. I am running Fading Suns campaigns right now, but will soon be back.

30/10 2008
Geographical Spread of Species added under Jorune and Shal.

22/12 2010
OK...back to Jorune. After what thought to be the homecoming in 2009 I was sidetracked and ended up gamemastering a campaign for World of Darkness (Vampire) which took 1½ years to complete.

After a long, long break from Jorune, it's now time again to visit the mysterious world of seven moons. In preparation for the new Tales, the website was revived and remade with another tool. It will now also include material from other RPGs than Jorune.

Codex Jorunis (the Jorune rules we use when playing our campaign) and all charts, files etc needed uploaded under Shal.

The following people should be appointed drenn status (at least):

Andrew and Amy Leker
For creating the amazing world of Jorune.

Miles Teves
For letting me use his incredible Jorune artwork and for creating the amazing world of Jorune.

Caroline Mansell
My super wife. For tolerating late night role-playing sessions all these years and enduring my hours in front of the computer.

My kids - Elliot & Molly - and some of the kids of the other roleplayers - play roleplaying games as well, and often inspire me with ideas and drawings for nasty deadly monsters, gruesome traps and cruel NPCs. The minds of kids are scary....

Mikael Ohlsson
Friend, rugby player and computer freak who always helps me when I get stuck with my webpage work.

Joe Coleman
For being devoted to Jorune and keeping the exploratory spirit alive.

Ola Holmdahl
For his amazing images of the characters adventuring on Jorune and throughout Widewater.

Martin Holmdahl
For his amazing and often funny images of Jorune, player characters and Jorune nasties. Most of them drawn while playing or depicting certain scenes.

My players
For enduring and expanding on my adventure ideas and often surprising me with their clever/stupid/strange/unwholesome actions.

First via email lists and then via Facebook. A lot of ideas bubble through from there and start growing into unwholesome (for my players) adventure ideas.